The OTSAW Journey: Riding on a Dream Towards the Future 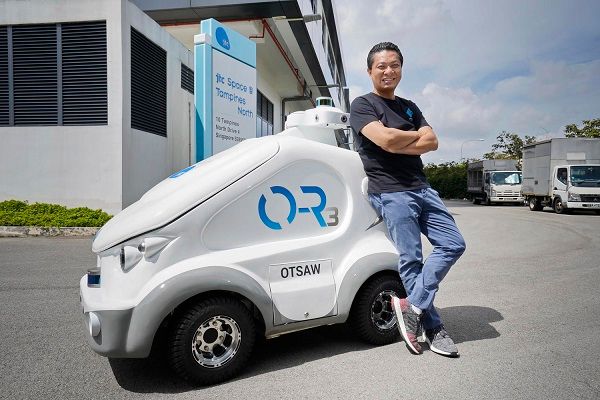 Even with an established service and solution-based business under his belt, Mr Ling Ting Ming was never one to rest on his laurels. Spending two years in Silicon Valley opened up his eyes to the endless possibilities brought about by deep technology. It inspired him to invest in the realm of artificial intelligence and robotics, and today, OTSAW has become a leader in its own rights with the development of its core technology and range of robotic solutions.

How OTSAW happened: Bringing a dream to fruition

Before becoming the founder and Chief Executive Officer of ActiV Technology Group and OTSAW, Mr Ling Ting Ming never foresaw himself embarking on the journey of entrepreneurship.

At the age of 35, he had quit his corporate job as a sales director of a regional multinational corporation (MNC). Mr Ling toyed with the idea of getting another job at a different MNC, but in another three years, he would hit the ceiling, and where was he going to go from there?

It was then that Mr Ling thought about starting his own business. Even if he failed, he could still go back to the corporate world in his late 30s. However, if he did not take the risk to venture out, he would be too afraid to do so at the age of 40. With encouragement and support from his friends, Mr Ling took a leap of faith and started ActiV Technology in 2006.

However, I continued to persevere and managed to land a big contract with a big global company. We never looked back since then and ActiV has grown into a company with over 400 employees,” said Mr Ling.

In 2015, Mr Ling decided to travel to Silicon Valley in the United States of America (USA). During his two years there, he dived into the world of deep technology and started OTSAW. Wanting to break away from the service provider model of ActiV Technology, Mr Ling had a dream to build a separate brand with its own intellectual property.

“I wanted to do something else as I did not want to get too comfortable. I could sense an uneasiness. With the world constantly changing, we had to do something rather than wait for the tsunami to hit us.

I wanted to learn from the best in Silicon Valley and to find out why they were so successful. At that time, my idea was to develop something and bring it back to Asia,” shared Mr Ling.

Five years on, OTSAW has since progressed and pioneered a series of autonomous robotic solutions for security, delivery and mobility applications.

Looking back, Mr Ling recounted that the journey was fraught with challenges and mistakes. As compared to ActiV Technology, OTSAW was in the business of research and development and he had no experience running a business in this area.

Lacking knowledge on where to start with the new business, Mr Ling attended many seminars and workshops in the US to get himself connected with people in the industry.

“There were very few of such talents [in the area of autonomous technology] in Singapore at that time. It was difficult trying to amass a team together in Singapore as some of the folks in the US were reluctant to move.

The company went through a lot of soul-searching during these five years as employees came and went. The people who are still with us today are those that share the same passion and values. We are all here because we see a common goal: to build a world-class robotics company,” expressed Mr Ling.

Apart from talent, acquiring funds was also a key challenge for the business. As an innovation company, OTSAW required a lot of capital for it to reach a point where it could be commercialised. At the time, obtaining buy-in from investors was difficult as robotics and autonomous technology were still relatively unexplored and misunderstood within Asia.

“I have a lot of respect for anyone that makes a product. From an idea to execution to actual trials, there are often times where you doubt yourself. You are not selling a ready-made product; a lot of effort and detailing has to be put in before the product can be put out into the market.

As we learn, we are also burning money, so there is also the pressure of time to put out a minimum viable product,” explained Mr Ling.

While his entrepreneurial journey has been a rocky one, Mr Ling cites that there is a reason and purpose to everything. He hopes that by sharing the challenges that he has faced, other aspiring entrepreneurs will be able to see that even at the lowest point, there is still hope.

“If you have a dream, you should follow your dream. In Asia, many do not dare to dream. Even when they do, they never set out to achieve it as they are unwilling to step out of their comfort zone.

This mindset of being afraid to lose is a big problem. Without moving, you will never fall. But if you never move, you will not be able to reach your next goal in life.

As an entrepreneur, there may be times when nobody believes in you, but that is when you have to pick yourself up and continue to believe in what you are pursuing. In those darkest and loneliest moments, you have to push through.

You must have the wisdom and the will to persevere. Even today, the lowest and most difficult points of my journey continue to serve as a reminder of what has strengthened me along the way,” added Mr Ling.

Stepping out of his comfort zone also meant learning to be comfortable when working with people that he is not comfortable with. According to Mr Ling, working with the younger generation has enabled him to be unassuming, and to understand and connect with the new world at large.

“To be an effective leader, you must know your people well at an individual level. Because everyone is unique, you need to invest your time to understand and build rapport with them.

In today’s era, the traditional boss and employee model no longer goes. If you do not understand the intricacies of their work and thought processes, you cannot effectively motivate them and run the business,” shared Mr Ling.

This article originally appeared in the Entrepreneur's Digest print edition #92 and has been edited for clarity, brevity and for the relevance of this website.